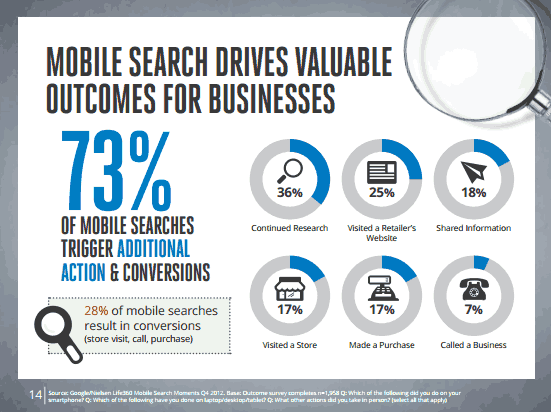 Google is rolling out AdWords enhanced campaigns. Starting on July 22nd, all legacy campaigns begin to get automatically upgraded. Enhanced campaigns raise focus on mobile: it gets easier to customize, target and bid for mobile users.

I learned about enhanced campaigns the hard way.

When setting up a new campaign last week, I accepted the default setting. The new campaign was enhanced, i.e. the ads are displayed to mobile users, using the same bid as for desktop and tablets. The result was:

Why? I started digging into the stats and found out that the majority of the clicks were from mobile users. If I disregarded mobile users, the stats were actually pretty good. The problem was that just by accepting the defaults, I ended up bidding way too much for clicks on mobile.

My immediate action was to modify the bid strategy so that for mobile we bid much less. It’s easy to do, but also easy to miss if you accept the defaults.

So, problem solved? Maybe AdWords mobile would be an opportunity? Based on a study by Google/Nielsen released in March 2013, mobile ads drive multi-channel conversions and trigger follow-up actions.

I have yet to hear about AdWords mobile success stories. So far I’ve heard only bad experiences from advertisers. Mobile increases inventory, the CPC is cheap, but: the conversion rates are way lower than desktop – in every industry. This is bound to change, I assume.

The above mentioned study states that Mobile search drives valuable outcomes for businesses. At the time being, it’s valueble for one business: Google.